You can read reviews from some of our Good Humour’d events here.

The Life and Opinions of Tristram Shandy, Gentleman – a one-man performance by Stephen Oxley

One of the most surprising, not to say affecting, aspects of Mr. Oxley’s one man show is… But that’s not how to start a review: conventions must be observed. We’ll arrive at that bit in due course…

St. Helen’s Church was an inspired choice of venue for Stephen Oxley’s performance of his one-man adaptation of The Life and Opinions of Tristram Shandy, Gentleman: memorials to Sterne’s contemporaries from York’s ‘Good Humour Club’ shiver on its walls, while the church’s position between his printer on Coney Street and John Hinxman’s bookshop on Stonegate means that Sterne himself would have passed under its distinctive lantern tower many times. There was also something gratifying about the ribaldry of Oxley’s adaptation taking place on hallowed turf, given that Sterne was a clergyman. The performance, directed by Felicity Dean, marked the tercentenary of Laurence Sterne’s birth, and the remarkable fact that Tristram Shandy has never been out of print. It begins with a be-gowned Oxley delivering a stultifying peroration from the lectern, before tossing the sheaves of his sermon in a bravura gesture that also shakes off his priestly robes and establishes the irreverent tone. The focal point of the minimalist set design is a sturdy chest, which is given the range of a character actor from an Ealing comedy thanks to Oxley’s artful interactions. During Tristram’s conception it doubles as the conjugal bed (with Oxley as Mrs. Shandy slumped over it) and as Mrs. Shandy herself, while Oxley as Tristram’s climacteric father delivers an unforgettable facial expression. Its slamming lid also supplies the wince-producing sound effects in the sash window scene. Read more… 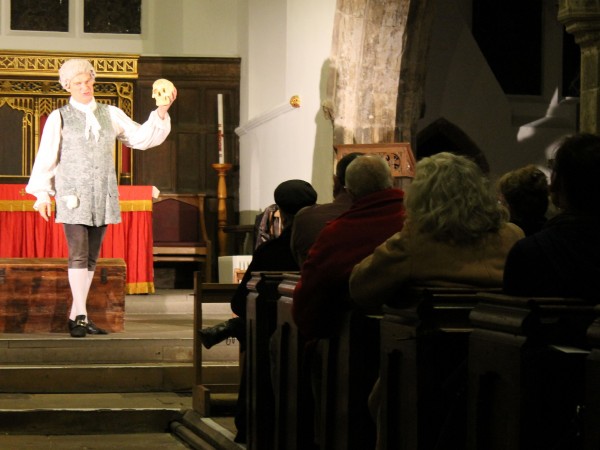 Back to Learning
Laurence Sterne Trust