Food and drink were important elements of sociability and also indicators of status in the eighteenth century. From the minutes of the Good Humour Club, we know that the members met every Thursday night for supper at Sunton’s Coffee House. But just what kind of delectable dishes and titillating tipples might the members have consumed?

Would you know how we meet our jolly full Bowls?

The Sweet melts the Sharp, the Kind Sooth[e]s the Strong,

And nothing but Friendship grows all the Night long.

Punch was perhaps the most convivial of drinks. It was served from a communal bowl and made by mixing together different spirits, or ‘mingl[ing]’ them as Purcell puts it. The ‘crown bowl of punch’ features prominently in the minute books of the Good Humour Club. It was one of the tenants of the Club that members would pay the penalty of a ‘crown bowl’ should they chose to get married. Indeed one enthusiastic member, a ‘Dr’ Allen who had presumably been married and widowed before his membership, is recorded as promising to stand the Club ‘2 Bowls of Punch value 5s. each’ should he ever marry again (Minutes from 28 July 1743). Alcohol was also frequently mentioned in connection to wagers between members, whether it was ‘a Bowl or Bowls of Punch, or a Bottle or Bottles of wine’ (Minutes from 27 December 1744). In May 1755, for example, Mr Smithson placed a bet with Mr Jubb for five half-crown bowls of punch:

Mr. Smithson betts [sic] 5 Bowls of Punch of 2s. 6d. each to 4 with Mr. Jubb, that George the Second, King of Great Britain, will not have a Personal Interview with Frederick King of Prussia, during the Residence of his Britannic Majesty in Germany, or elsewhere this summer.

Sadly, our minute book does not record the outcome of the bet, but as the Club had a rule that any alcohol wagers must be consumed on the night that the bet was settled, either result would have led to a very convivial evening at the Club.

As the name ‘crown bowl’ suggests, punch was sold in volumes designated by monetary value: a crown (5 shillings), 2 shillings, or half-crown (2 shillings and sixpence) measure. According to historian Karen Harvey, the half -crown bowl was the most common and substantial enough for eight or nine drinkers [1]. As the Good Humour Club’s members numbered eighteen, a crown bowl would have been adequate to fill everyone’s glass. Harvey describes punch as a ‘middling’ class of drink, cheaper than wine but considerably more expensive than a pint of beer [2]. A crown however was not an inconsiderable amount of money, which suggests that our Club members were modestly prosperous tradesmen and professionals who could afford to indulge themselves at a weekly gathering.

Punch appears to have been an important element in the kind masculine sociability we now associate with clubs and coffee-house culture. It is certainly central to one of the most famous depictions of a convivial meeting from the period, Hogarth’s ‘A Modern Midnight Conversation’ (c.1732) and a powerfully evocative substance for at least one nineteenth-century writer. This atmospheric recollection of an eighteenth-century club, written by one ‘whose memory can travel back some distance into the last century’, is a fitting note to conclude on:

‘A crown bowl of punch’ was then a standing phrase; and we, gentle reader, are grey enough to remember some very jovial parties round bright mahogany tables, in the centre of which steamed a smoking hot compound, in a genuine china bowl, with a silver ladle, which said ladle very often had a silver coin inserted in the centre of its bowl, and which filled from time to time the rapidly emptied glasses, as the toast and song went briskly round; and every now and then the order was given, ‘Landlord! (for landlords in those days were usually their own waiters) another crown bowl’. Pardon this digression, reader, into which we have been betrayed by reminiscences of a far-off past, which seem to revive in our very nostrils a delicious odour of pine-apple run, lemons and limes, with all the et ceteras that go to make up that seductive compound, — punch.

One of our researchers, Helen Williams, from Northumbria University, has investigated the history of food in the eighteenth century and selected some of the most piquant tidbits, including a popular recipe for punch.

The numbers correspond to the order of images in the gallery below.

The Compleat Housewife was an international bestseller, which included recipes (receipts) for culinary dishes as well as medical treatments. The author, Eliza Smith, presents menus for each season.

Yorkshire author Elizabeth Moxon wrote another successful cookery book from this period, English Housewifry. Most editions of this text were published in Leeds but the eighth edition (1758) was sold by C. Etherington in a bookshop in York. The volume includes menu ideas and images of table layouts, showing that the most elaborate or largest dish was placed in the middle of the table, and sweet and savoury dishes were served simultaneously. Moxon’s punch recipe is one of the most popular from the period.

This joke book, written in the Sternean tradition, closes with a series of toasts recommended for ‘convivial assemblies’. Which would you choose? 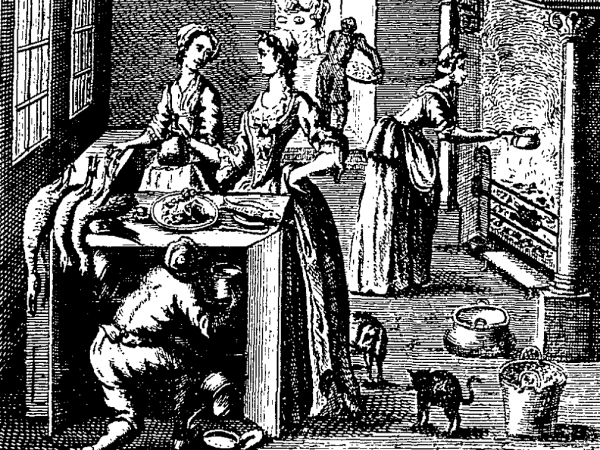 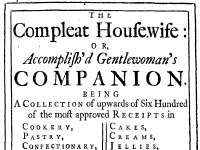 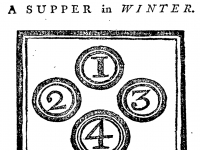 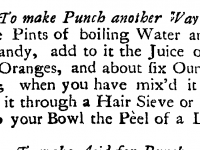 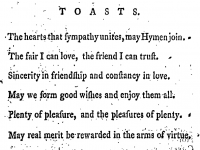