Roarings from the lion’s head

Joseph Addison installed the lion’s head postbox in Button’s Coffee-House in 1713 to make it easier for readers to correspond with his writerly persona, Nestor Ironside. These messages, or ‘roarings’ as they were dubbed, were frequently published in Addison and Steele’s newspaper the Guardian. When Addison first introduces the idea of the postbox on 2 June 1713 he promises to ‘have a particular Regard to all such Matters as come to my Hands through the Mouth of the Lion’. However, when he announces the installation of the postbox on 22 July, he establishes the following ground rules for submissions:

I need not acquaint my Readers, that my Lion, like a Moth or Book Worm, feeds upon nothing but Paper, and shall only beg of them to Diet him with wholsom [sic] and substantial Food. I must therefore desire that they will not gorge him either with Nonsense or Obscenity; and must likewise insist, that his Mouth be not defiled with Scandal, for I would not make use of him to revile the Human Species, and Satyrise those who are his Betters. I shall not suffer him to worry any Man’s Reputation, nor indeed fall on any Person whatsoever, such only excepted as disgrace the Name of this generous Animal, and under the title of Lions contrive the Ruin of their Fellow-Subjects. I must desire likewise, that Intriguers will not make a Pimp of my Lion, and by his means convey their Thoughts to one another. […] I hope I shall not be thought to derogate from my Lion’s Character, by representing him as such a peaceable good-natured well-designing Beast. I intend to publish once every week the roarings of the Lion, and hope to make him roar so loud as to be heard over all the British Nation. If my Correspondents will do their Parts in prompting him, and supplying him with suitable Provision, I question not but the Lion’s Head will be reckoned the best Head in England.

At the Laurence Sterne Trust, we decided to borrow Addison’s idea and set up our own lion’s head postbox in the Good Humour Club exhibition. Being less proscriptive than Addison,we simply asked visitors to write any comments, thoughts, or jokes that they’d like to share with The Good Humour Club on the back of a postcard and feed it to our friendly lion. We’ve published some of our favourite ‘roarings’ below. We would like to thank our many contributors for their messages, and apologise in advance for some of the jokes you are about to read.

What did the bull say when he came out of the china shop?

I had a smashing time!

What did the fish say when he swam into a brick wall?

I was asked to create an 8 character password online so I used ‘Snow White & the Seven Dwarves’.

Why is there no aspirin in the jungle?

Because the parrots ate ‘em all!

Why would Cinderella be a terrible football player?

Because she had a pumpkin for a coach and she always runs from the ball!

Did you hear the one about the magic tractor?

It turned into a field.

What do you call a deer with no eyes?

What do you call a cheese that’s not yours?

Why did the banana go to hospital?

Because he didn’t peel very well.

What do you call a train fully of toffee?

My attempt at a “cut-up” (with apologies to Papyrius Cursor):

A letter from Falmouth | honouring Mr. Nicholson | May be viewed by two tickets preceding the | marriage of his Royal Highness the | white pointer dog 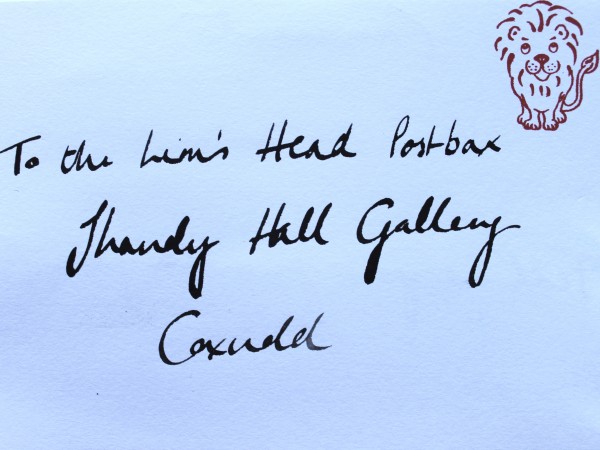 Back to The bookshelf in the coffeehouse
Laurence Sterne Trust