Bloodletting was a particularly popular, as well as inexpensive, treatment that had been used for a broad selection of conditions, including melancholy, since the existence of ancient civilisations. Classical authors including Galen referred to bloodletting as a useful technique for maintaining a healthy body.

Whilst, as caricatures often are, the stream of blood emitting from the patient’s vein is somewhat exaggerated, Gillray captures the meaning and purpose of bloodletting (see image below). Although bloodletting was a relatively common practice, his depiction suggests that patients were no more comfortable with these procedures than many are today with vaccinations. As the medical practitioner collects the ‘excess’ into a small measuring bowl, his patient appears uncomfortable with the process opting instead to turn away. The patient’s arm is also wrapped with a small red tourniquet above the inside joint of the elbow and the incision. The tourniquet was a simplistic piece of medical equipment, a tightly wound bandage and a small wooden post, the bandage intended to restrict bloodflow in the wrong direction and to further dilate the vein being opened. The use of a tourniquet also aided practitioners in identifying the site of an appropriate vein for use close to the skin’s surface.

Once a vein was identified, all that remained was to make a small incision, or as Gillray suggests, ‘breathe’ it. Numerous medical devices were used to create this effect including lancets, scarificators and even the application of leeches to the patient’s skin. The bloodletting device on display at the Good Humour Club exhibition was known as a fleam (see photograph below).  The multi-bladed fleam is thought to have been used for both human and veterinary medical purposes, with some historians believing that due to limited public knowledge around bacterial infection and sanitation techniques that a single fleam may have been used for both human and animal patients. If closely examined, a difference in size of each of the blades is apparent. The lower blade is narrow, creating the smallest incision with the other two slightly increasing in size. This would allow the medical practitioner carrying out a bloodletting procedure to choose how large the cut would need to be, thus attempting to control the rate and volume of blood lost. This example of a bloodletting fleam dates between the late eighteenth to early nineteenth century and the marking on the lower blade indicates that it was produced by a trader known as ‘D. Miller & Son’ whose location remains unknown. 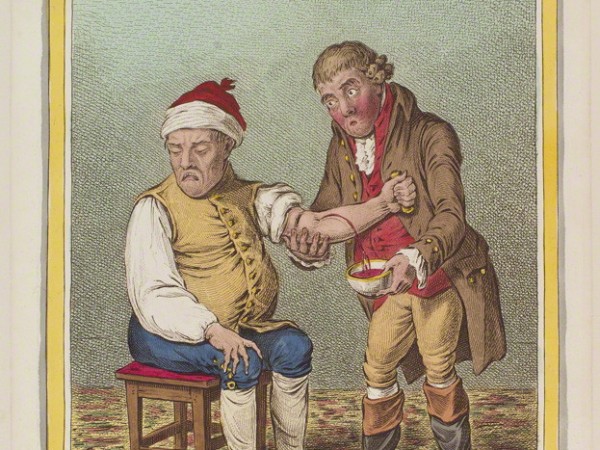 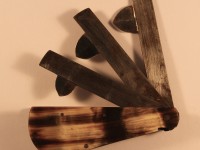