Story of the week

1759 was an auspicious year for many reasons, not least of which was the announcement which appeared in the York Courant advertising the publication of volumes one and two of Tristram Shandy in York. This section of the Good Humour Club website will be regularly updated with genuine news items, announcements, and advertisements which were printed in the York Courant during this year, leading up to the novel’s publication in December 1759.

Another extract here from the advertising section of the Courant, this time inviting readers to purchase tickets for a theatrical evening for the benefit of Mr and Mrs Wheeler, who features as one of the actors. The programme moves from lurid tragedy and comedy to please all comers, while the frequent references to previous London productions seems intended to imply that this is no provincial entertainment, if not quite the latest fashion. 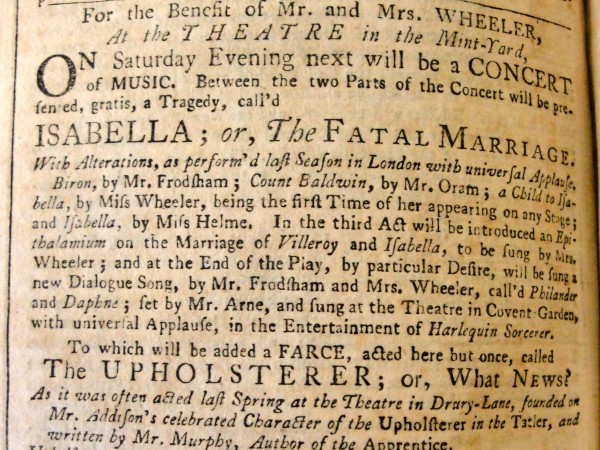 Back to Newspapers
Laurence Sterne Trust