The advertisements printed in the eighteenth-century news were often the most entertaining part of the whole paper. As many of the news items in the York Courant were reprinted from the London papers, it is only in the advertisements that the local voice of eighteenth-century York is can be clearly heard. Here, two coachmen issue a public apology for their reckless driving, especially for putting ‘Mr. Hewitt’s Lady […]to great Terror’:

WE JOHN MACKONEY and JOHN CLAPHAM, Servants to Mr. John Brook, of the City of York, Dealer in Coaches, do hereby acknowledge, That as we were driving Sir George Armytage’s Post-Chaise thro’ Colliergate, in the said City, Yesterday Afternoon, between One and Two o’ Clock, we came up with the Coach of John Hewitt, Esq; which was going thro’ the same Street, and by driving the said Chaise carelessly and furiously, by the said Mr. Hewitt’s Coach, in which Mr. Hewitt’s Lady then was, the Horses in the said Coach took Fright, and one of them broke from his Traces, the Coachman was thrown from his Box, and one of the Footmen from behind the Coach, and one of the Wheels was broke and much damaged, and Mr. Hewitt’s Lady was put in great Terror, and her Life endangered: And we do hereby declare, That we are sincerely sorry for the said Accident, and for the Mischief that was done upon that Occasion; and if the said Mr. Hewitt will be pleased to forgive it, we do hereby promise never to be guilty of the like Misbehaviour for the future: And we do consent, that this Acknowledgement shall be published in any publick News Paper or News Papers, as the said Mr. Hewitt shall think proper. 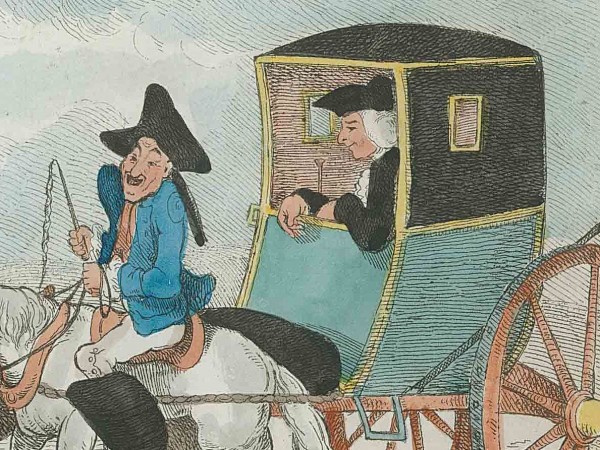 Back to Story of the week
Laurence Sterne Trust